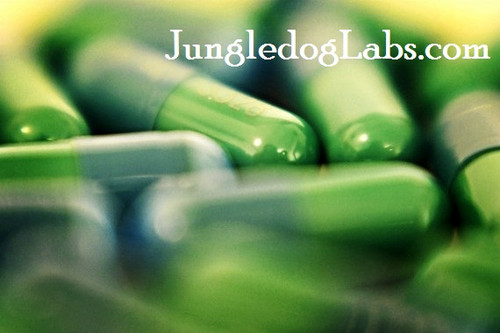 Here at Jungledog Labs our dedication to a healthy and happy life is job one! Doctors do not walk on water, cancer therapies are extremely hard on the human body & most medicines are made from ideas found in nature. Because of this, we have spent over 2 years formulating our matrix of Health Enhancing agents. We cannot legally say that Organicare will prevent, stop or hinder cancer or that it will help in the destruction of rogue cells but we encourage you to research our all natural, organic ingredients and consider the health benefits for yourself.

Organicare – The revolutionary new supplement, only found here at Jungledog Labs, is specifically designed as a first line of defense against the dangerous environmental poisons we are faced with on a daily basis. Just 2-3 capsules per day will help change your life for the better! It is specifically formulated to sharpen cognition, promote DNA repair & cellular detoxification, it also creates the perfect environment to allow for better mitochondrial health and protein folding.  Organicare has been designed and created over years of study by Jungledog Labs and contains the proprietary blend of Turmeric, Curcumin, ECGC, Resveratrol, Fucoxanthin, Goji Berry, Quercetin Dihydrate, Pomegranate Extract, Dark Chocolate, Acai Berry & Piperine. This health enhancing matrix can only be found in Organicare and is the daily supplement that will change your life forever. Come see what everyone has been talking about!

~ Cancer cells cannot rapidly spread or even survive without a blood supply and turmeric has the ability to prevent angiogenesis within your body.

~ ECGC has also been shown to inhibit tumor cell proliferation and induce apoptosis.

~ ECGC may protect against damage caused by ultraviolet (UV) B radiation.

~ ECGC has been shown to activate detoxification enzymes, such as glutathione S-transferase and quinone reductase, that may help protect against tumor development.

~ Resveratrol’s antioxidant, anti-inflammatory, and anti-carcinogenic properties have been well-established by science, and its benefits are thought to extend to the prevention and treatment of chronic diseases. Diseases such as cancer and Alzheimer’s disease, among others are thought to be effected.

~ Research has shown that resveratrol has the ability to deeply penetrate the center of a cell's nucleus, allowing the DNA to repair free radical damage that might otherwise contribute to cancerous growth.

~ Resveratrol's anti-inflammatory properties help prevent certain enzymes from forming that trigger tumor development. It also helps cut down cell reproduction, which helps reduce the number of cell divisions that could contribute to the progression of cancer cell growth.

~ Besides playing a role in the possible prevention of cancer, studies have also found that resveratrol can serve important functions in conjunction with conventional cancer therapies, as it acts as a:

~ Fucoxanthin has a cytotoxic effect on cancer cells.

~ proven to increase your body’s potential to prevent the enzymatic process of the human body which attacks and eliminates the supplements from your system.